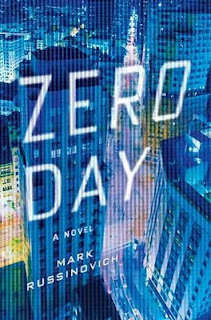 Jeff Aiken, a former government analyst with his own computer business now, is hired by a law firm in New York to help them recover their computer systems after a virus caused them to crash. At the same time, his former colleague, Daryl, who still works for the government, is working on a computer glitch at a nearby hospital that resulted in several patient deaths. Then they start hearing about other computer issues ~ in airplanes, oil tankers, nuclear power plants and assembly lines around the world. Could it be the same virus attacking all of these computers? Jeff and Daryl team up to figure out what is really going on, and to find a solution before it's too late.

In Zero Day, Mark Russinovich weaves a frightening story that seems all too real. Computers run our lives. We rely on them for so many things ~ I hadn't even thought of how they are used in planes and ships and power plants. Computers are used to run just about everything. And the idea of a large-scale terrorist attack on computer systems definitely makes for a thrilling novel. But the fact that author Russinovich is a leading expert on cyber-security and a Technical Fellow at Microsoft makes this novel even more believable ~ and troubling. I admit I didn't understand all of the technical details that Jeff and Daryl work through in the story, but given who the author is, I'm sure they are accurate.

While there is a lot of focus on the characters working through the computer viruses, Zero Day has plenty of action too. We see the situation from the terrorists' eyes as they plan their attack and eliminate any obstacles in their way. And Jeff and Daryl, who are definitely not spies, find themselves in the line of fire as they try to find the source of the virus. The characters are all quite interesting, including the terrorists and the hackers who have helped them along the way. This is a fast-paced thriller that will make you look at the world a little differently when it ends.

Zero Day will be published on March 15. Follow Zero Day on Facebook to enter the March 15 giveaway of 10 signed copies of Zero Day and a signed Advance Review Copy!

This review was written based on a copy of Zero Day that I received from Phenix & Phenix Literary Publicists in exchange for an honest review.