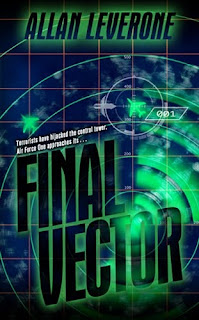 Nick is an air traffic controller at the Boston Consolidated TRACON in New Hampshire, where he's responsible for sequencing and spacing all of the arrival traffic for Boston's Logan Airport. When his wife is murdered, Nick takes some time off but decides to get back to work to ease the pain and get his mind off his loss. At the same time, a man known as Tony Andretti, who is actually from the Middle East, is organizing a sleeper cell of terrorists who are planning to shoot down Air Force One as it heads for Boston with the president of the United States on board.

In Final Vector, Allan Leverone has created a thriller with a regular guy as the main character. I've been reading a lot of thrillers this year, and it seems like most have a police officer or government agent (or former cop or government agent) who serves as the hero. But in this story, the guy who is trying to save the day is an air traffic controller. Granted, he has hundreds of people's lives in his control every day, but generally air traffic controllers don't know how to stop terrorists from killing the president! It was refreshing to have a more typical person in that role.

Nick is a likable character, and many other characters are as well ~ although I have to say many of them end up dead. There is quite a bit of violence in this novel, but that's to be expected in a thriller like this. It's not as intense as some other thrillers. It's really a straightforward storyline with few twists. It's very easy to follow along yet it's not completely predictable.

I do have to get one thing off my chest, which probably doesn't mean anything to anyone else, but I have to say it. Leverone chooses Hull, Massachusetts, as the location from which the terrorists will shoot down the plane. I lived in Hull for 15 years, and I was a bit frustrated by the inaccurate description of the town. However, it would be the perfect location for terrorists to go to shoot down an airplane (which is kind of scary in retrospect) so it was a good choice overall.

If you enjoy thrillers but want one that's not too scary and doesn't take constant concentration to follow along with all the overlapping storylines, this is a great option. It's a fast-moving storyline with quite a bit of action. And you'll find you care about the main characters ~ even the terrorists are interesting and unique. You'll also learn quite a bit about air traffic control from the author who is, himself, an air traffic controller.

This review was written based on an e-book copy of Final Vector that I received from Pump Up My Book in exchange for an honest review.