Book Review: The Water is Wide by Pat Conroy 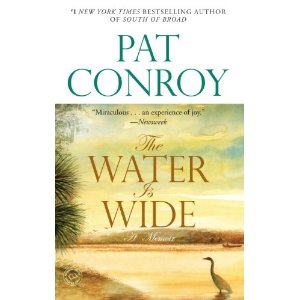 In The Water is Wide

, Conroy tells the story of his year teaching on the impoverished Yamacraw Island (for some reason he doesn't use the real name: Daufuskie Island). The conditions are horrible. The children, who span several elementary school grades, are closer to kindergartners in terms of academics. Many don't know the letters of the alphabet. They don't know what country they live in or who the president is. They don't even realize that the earth revolves around the sun. There are few school supplies and the one teacher who is currently at the school is an abusive disciplinarian who thinks the kids have to learn from the textbooks that they can't even read.

The story is written in a way that makes it feel like fiction, but this is actually based on his real experiences. I was appalled at the conditions in which these kids were supposed to learn. Conroy was a bit of a rebel in that he went against school policies and actually tried to teach the kids some fundamental lessons. I found his ideas and dedication inspirational. I was relieved to read this on Wikipedia.com: "Daufuskie Island School is a Beaufort County public school built in 1997. It is a modern facility with 17 students and significant community support, a marked contrast to the conditions depicted by Pat Conroy two generations ago in The Water is Wide." Although it makes me wonder what the conditions were like up until 1997.

This review was written based on an e-book copy of The Water is Wide that I received from the publisher, Open Road, through NetGalley in exchange for an honest review.