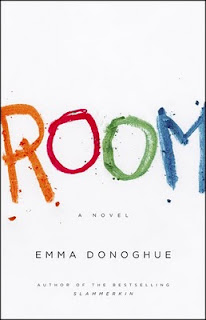 Five year-old Jack is very close to his Ma. They spend all day, every day together. Except when Jack goes into Wardrobe at night so Old Nick can have his way with Ma. Jack and Ma live in Room, surrounded by all the things that are important to Jack, including Rug and Bed and Wardrobe, of course. This is the world Jack has known since he was born, right here in Room. Old Nick lives in Outside but Jack has never actually been there. He's seen things on TV, but Ma has always explained that the things on TV aren't real. Until Jack's 5th birthday, when she tells him that Outside is real and it's filled with people just like them.

I've been reading about Room: A Novel

by Emma Donoghue for a long time now. It seems like everyone has read it and recommended it. So when it was chosen for my book club's February book, I was excited to finally take the time to read it myself. The first half of the book takes place in Room, where we learn all about the only world Jack has ever know, all from his personal perspective. The second half of the book moves to Outside, where we watch as Ma and Jack try to adapt to the real world after being locked away for so many years.

It's been about a week since I finished this book. Usually I write reviews right after reading a book but I felt like I needed to think about this one first. On the one hand, the voice of Jack quite honestly annoyed me at times. It was a bit of a struggle to read every single word in the voice of a 5 year old. But the overall story is amazingly well done.

The world that Donoghue has created in Room, and the perspective of a boy who has only ever known this one 11x11 square of the world, seems spot on. Then, when they transition to Outside, the interactions with people, including Ma's family, and the sensory issues Jack has to deal with also seem extremely realistic. I'm fascinated by the way Donoghue brought all of this together into a story of the love between a mother and a son. And I do have to say that the book wouldn't be nearly as compelling if it were told in someone else's voice.

On the surface, this book doesn't seem all that amazing. But when I really sat down and thought about the overall idea and the way Donoghue executed it, I am quite impressed.

Take a look inside Room

This review was written based on a copy of Room that I purchased.