Book Review: Murder on the Down Low by Pamela Samuels Young 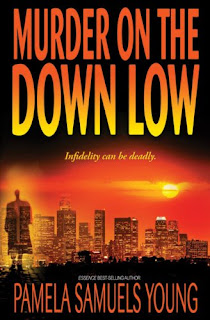 African-American men are being killed in L.A. These men are prominent family men, but soon detective J.C. learns that they were all on the "down low," meaning they were married to or dating women but meeting men on the side. She knows about men on the down low because her friend, Maya, just died from AIDS, which she contracted from her fiancee who they discovered was on the down low himself. Now Maya's cousin Special is out for revenge, and her friends J.C., Vernetta and Nichele are helping her out. But soon Special needs a lot more help than they had expected when the police start considering her a suspect in all of these murders.

Murder on the Down Low

by Pamela Samuels Young is a quick-paced crime novel, but I have to admit that for the first third of this book, I was very angry and annoyed. The storyline during this time suggests that women almost exclusively contract HIV by having sex with men who have had sex with other men. As someone who used to work for an AIDS organization, and who knew many people who had contracted the disease in many other ways, I was extremely frustrated with the characters in this book ~ and quite honestly, the author, since I was worried this was going to be the theme running throughout the entire book.

However, Pamela Samuels Young redeemed herself later in the book and I'm glad that I didn't give up on it ~ as I had considered doing. The story itself is suspenseful and included enough twists and turns to make me want to keep going to see what was going to happen and who was really killing these men. I had my suspicions but was never sure of the killer until that person was revealed.

If you enjoy crime novels, and can get past the flaws and prejudice of some of the characters, I'd recommend this one. It's also about friendship and trust within relationships, as well as how different people deal with the loss of a loved one.

This review was written based on a copy of Murder on the Down Low that I received from Pump Up Your Book in exchange for an honest review.