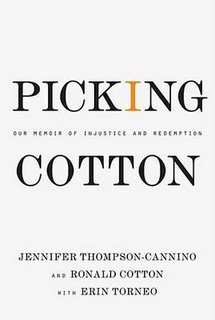 In 1984, Jennifer Thompson was asleep in her bed when a man broke in and raped her. She concentrated on his face, trying to notice every detail so she could help the police find him if she were able to get away. She did, and when the police showed her photos and put her in front of a line-up, she identified Ronald Cotton as her rapist. She was positive she had the right man. He was found guilty based on her eyewitness account, and sentenced to life in prison. Eleven years later, a DNA test showed Ronald Cotton was innocent.

by Jennifer Thompson-Cannino and Ronald Cotton with Erin Torneo tells the story, first from Jennifer's perspective and then from Ron's, of the trials, their lives during Ron's incarceration and the friendship they built after he was released. This was an eye-opening book, showing the flaws inherent in the investigation methods used by the police, and why eyewitnesses may find themselves identifying the wrong person. It sheds light on the fact that there are many others who are currently in jail, or who have even been executed in the past, who were there because of eyewitness accounts that may have been wrong.

This memoir is well written and a very quick read, although I won't call it an easy read because of the subject matter. The rape is described in some detail, and the whole situation is disturbing as we know that an innocent man is in prison ~ although we also know he is eventually freed, so that helps. My book club will be discussing the book later this week, and I think it will make for an interesting discussion.

For more information about the book, the authors and the issues, visit the Picking Cotton website.


This review was written based on a copy of Picking Cotton that I acquired through PaperBackSwap.com.