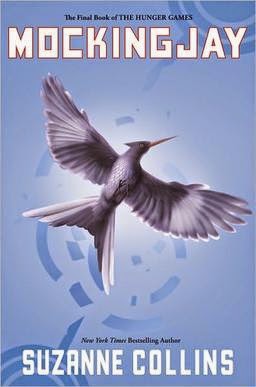 I read The Hunger Games

by Suzanne Collins last summer. It was actually one of my book club selections. I was surprised by how much I loved it because I'm not a big YA fan. I read Catching Fire

soon after, and enjoyed that as well, although not quite as much as the first book. So now comes Mockingjay

, the final book in The Hunger Games trilogy. I was very excited to read it and find out how this story would end.

I have to say I was a bit disappointed. While I enjoyed getting back to these interesting characters who end up in some very unusual situations, the story itself was not on par with the first book at all. Perhaps it was the lack of an actual Hunger Games inside an arena. There are battle scenes in this one, as the districts fight for freedom from the capital. And the capital resorts to its usual tactic of manufactured man-eating creatures and waves of deadly goo pouring down the streets. But it just wasn't the same without the arena.

It's interesting because I read another trilogy over the past year: The Millennium trilogy

by Stieg Larsson. With that series, the books got better as they went along. The last book in that trilogy was my favorite. But in The Hunger Games, it seems like Suzanne Collins took a great book and struggled to make it into a trilogy. The last book tied things up, but it felt like that was all it was doing.

It wasn't all bad. As I said, it was fun to get back to the characters and the unique environment Collins created for this series of books. And it's nice to have an ending instead of wondering what is going to happen, as I have been for a year! It just wasn't as good as I was hoping it would be.

This review was written based on a copy of Mockingjay that I borrowed from a friend.