Book Review: The Adventures of Captain Underpants by Dav Pilkey 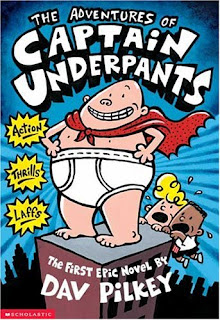 series by Dav Pilkey before checking it out, but when I saw it on the Most Frequently Challenged Books, I thought it would be a great way to support Banned Books Week. We picked out the first book in the series, The Adventures of Captain Underpants

. I opened it up and was ready for lots of bad behavior and potty mouth dialog. What I got was a big surprise.

This book wasn't nearly as bad as I had expected. As a matter of fact, I thought it was pretty funny. And C did too. The story is about two 4th grade boys, George and Harold, who are always getting into trouble at school. The principal can't stand them or the comic books they write. When he finally gets the evidence he needs to take the boys down, they resort to desperate measures to save themselves, and in the process turn their principal into their comic book superhero Captain Underpants!

Do the boys misbehave? Of course. Might C learn a trick or two from them about how to misbehave? Yes, I suppose he might. But the story wasn't damaging or disturbing. It was funny, which is exactly what it was meant to be. It certainly shouldn't be banned.