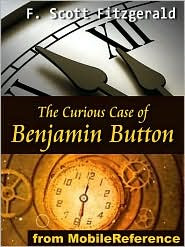 When Benjamin Button is born, everyone is appalled, for instead of a tiny infant, Benjamin is a grown old man. His parents try to pretend there's nothing wrong, giving him a rattle to play with and dressing him in very large baby clothes. But Benjamin's life is anything but normal. In The Curious Case of Benjamin Button

, F. Scott Fitzgerald tells us the story of Benjamin's life as he progresses from old man through adulthood and childhood, until he ends his life as an infant.

I decided to read The Curious Case of Benjamin Button because I was bored on a road trip and found it on my BlackBerry. It was only 93 BlackBerry-sized pages, so it's a very short story. I really enjoyed it. The beginning of the version I read states: "This story was inspired by a remark of Mark Twain's to the effect that it was a pity that the best part of life came at the beginning and the worst part at the end." I thought this was a very interesting comment, and I found the story to be quite thought-provoking.

There were definitely benefits to Benjamin living his life backwards. He had much more knowledge as a child and more energy and vitality as he got older. The idea of ending life as an infant without a care in the world is a pleasant idea as well. But the reactions of other people to him, particularly his father and his son were sad. And he faced many challenges as he lived life in a completely different direction than everyone else.

I really enjoyed this story and am determined to read more of Fitzgerald's work in the future. I also wonder, now, how the movie compares to the book. I may need to check it out sometime.

This review was written based on a copy of The Curious Case of Benjamin Button that I purchased.