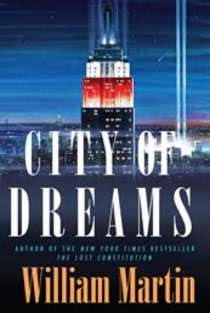 Somewhere in New York, there is a box of New Emission Money from the Revolutionary War that could be worth billions of dollars today. When Evangeline hears about these bonds, she and her boyfriend Peter Fallon, an antique book expert, set out to find them. But soon, they find themselves wrapped up in a race against time with some very dangerous opponents and a mysterious bag lady. In City of Dreams, William Martin brings us into the race to find the bonds, while also showing us where the bonds originated and who's been searching for them over the past 200 years.

I really enjoyed City of Dreams. It reminded me of the National Treasure movies because it combined a modern-day treasure hunt with lots of American history thrown in. In this case, the treasure is a simple mahogany box filled with New Emission Money, and it's somewhere in New York. But finding a small box in a big city isn't exactly easy. I love the way Martin alternates chapters between the modern story of Peter and Evangeline, and the stories of the past ~ from the people who first obtain the bonds in the 1700s to those who have been trying to find or cash in on them over the years leading up to modern day.

Martin paints a vivid picture of New York through several moments in history, sharing the experiences of soldiers in the Revolutionary War and the horrors of those who were in the World Trade Center on the morning of September 11, 2001. Although he packs in a lot of history, his writing style is easy to read and the stories all flow well. He developed many of the characters through the different time periods, making me really care about them. Overall, City of Dreams is a fun and exciting adventure. I'll definitely be checking out some of Martin's other books featuring the Peter Fallon character.

This review was written based on a copy of City of Dreams that I received from Tor and Forge Books in exchange for an honest review.