Book Review: What Difference Do It Make? by Ron Hall, Denver Moore and Lynn Vincent 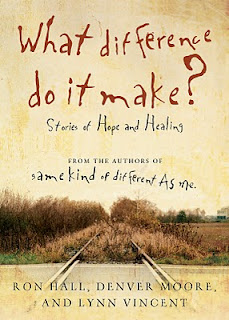 What Difference Do It Make? Stories of Hope and Healing by Ron Hall, Denver Moore and Lynn Vincent is the follow-up to Same Kind of Different as Me, which I recently read and reviewed here. It is composed of 27 very short chapters, each of which presents an anecdote about how Same Kind of Different As Me has inspired someone to make changes in their own lives, and in the lives of others. The Introduction to the book is a great synopsis of what you'll find there:

Since June 2006, when Same Kind of Different as Me snuck first onto bookstore shelves, then onto the New York Times bestsellers list, Denver and I have traveled thousands of miles back and forth across America. We’ve spoken at hundreds of venues, from local book clubs filled with sweet little old ladies to the Bethesda, Maryland, symphony hall. (We were in Bethesda as guests of Doro Bush Kock and her mother, former first lady Barbara Bush, who quite possibly is Denver’s biggest fan.) Throughout that time, we have seen thousands of lives changed—homeless shelters started and millions of dollars raised for the homeless, yes, but also astonishing changes in the lives of everyday Americans that we never could’ve imagined or predicted.

That’s why we wrote this book, to tell you just a few of the stories of hope and redemption that God continues to write in the lives of so many—and in our own.

One day in the spring of 2009, as we were writing, I was in the kitchen at the Murchison estate, where Denver and I live, on a conference call with executives at Thomas Nelson, our publisher. During the call, Denver walked in.

“Hey, Denver,” I said, putting the call on speaker. “We’re talking about titles for the new book. Got any ideas?”

“Title for the new book?” he said, screwing his eyelids down into his famous hard squint. “What difference do it make?”

Denver shrugged and walked off, shaking his head.

It was the perfect title. Since Same Kind came out, over and over, like the needle stuck in the groove of an old vinyl record, we’ve repeated a single message: one person can make a difference. My wife, Deborah Hall, is proof of that.

As many of you know, God took Deborah in 2001. Cancer. But if she were here today, she would tell you she was nobody special. If you had come to our house, she would have made you fresh coffee or tea and invited you to sit down at the kitchen table and tell her about yourself. And you would have felt loved. Because that was Deborah’s gift. She loved God and, because of her intimate walk with Him, loved people. Her whole life was about forgiveness and unconditional love, two qualities that most of us find difficult to master on a regular basis.

It really was that simple. Deborah’s life showed that kind of love is attainable for anyone willing to put in the time on their knees, then overcome their fear and go out and get their hands a little dirty. And I have talked to literally hundreds of people who told me that Deborah’s story inspired them to do just that. Through the difference her life made, others are now making a difference, and that’s in part what this book is about. It’s packed full with stories folks have shared with us about how Deborah’s example inspired them to do more, both in their own homes and in their communities.

A lady named Ann, for example, wrote to us from Vivian, a small Louisiana town just north of Shreveport—not too far from Red River Parish, where Denver worked the plantations. Ann wrote of how she loaned Same Kind of Different as Me to about twenty different friends. Every friend who brings it back has a very different story about how the story affected him or her.

“One person notices the friendship Denver and Ron share,” Ann wrote. “Another feels shame over the way her grandparents treated the ‘Denvers’ in their lives.”

One woman surprised Ann by telling her that the portion of the book that dealt with Deborah’s cancer battle stirred her to go and have a colonoscopy she’d been putting off!

Like Ann, we’ve been struck by the amazing variety of stories people tell us about how Debbie’s story affected them. Here we thought we were writing a book about one woman’s determination to make a difference for the homeless, and we started getting letters about marriages restored, friendships renewed, ministries begun, even babies adopted!

In Fort Worth, a high school teacher named Carin told us that, “unbelievably,” she’d been able to get the school administration to approve our book to be read by her entire mental-health class. “The students have learned how so many issues affect our mental health,” Carin wrote. “I have also used the book to help relay to them the importance of community involvement, passion, and what it means to be a servant to others.”

Shortly after Deborah died, her best friend, Mary Ellen, told me that God had whispered to her during prayer that Deborah was like the kernel of wheat Jesus refers to in the gospel of John: “Truly, truly, I say to you, unless a grain of wheat falls into the earth and dies, it remains alone; but if it dies, it bears much fruit.”

Mary Ellen told me she thought that maybe Deborah’s death would be like that—fruitful. I cannot even express how much I absolutely did not want to hear that at the time. But it appears that Mary Ellen was right, more right than even she knew.

She told me about the wheat kernel just a couple of days before the dedication of the Deborah L. Hall Memorial Chapel, the new worship facility built at the Union Gospel Mission in my wife’s honor and funded by donations that poured in after local folks heard Denver’s story at her memorial service. At the time, we thought the chapel, along with the new care facilities for the homeless, were the fruit God would bring from my wife’s death. I had no idea that the Union Gospel Mission was just the first fruit in what would become a cornucopia of blessing.

Take Detra, for example. Detra, who lives in Austin, Texas, wrote to tell us that after reading Deborah’s story, she decided to start carrying food and socks and blankets in her car so that she can bless the homeless. Also, her church had a picnic in an Austin park and had so much food that they began feeding hungry people who were in the park that day.

One little girl asked Detra, “When are you coming back?”

After that, the church made the picnic a monthly event where church members sit down and break bread with the homeless.

Would I take back blessings like that one and those you are about to read about in this book? If I could rewind time like a video and create a cancer story with a happy ending, would I?

I’m sorry to say there’s a big part of me that says, “Yes! I want my wife back!”

But I can tell you without reservation that Deborah would say, “No, Ron. I’ll see you soon.”

But in 2009, I learned that sometimes the most difficult difference to make is the one that’s closest to home.

I have to admit I had a hard time getting into this book at first. Although both books have chapters that alternate between Ron and Denver, this one is a bit more choppy because the stories they are telling don't really flow together. There is one storyline that continues through several chapters ~ about Ron's relationship with his father (and I really loved reading about this). Otherwise, each chapter is a separate story. Once I got used to this format, I really enjoyed it. And it's nice that it's a book you can easily put down and pick up over and over again.

The actual stories of how a single book has inspired so many people is amazing. I had tears in my eyes a few times, and couldn't hold them back while reading the last chapter about a woman making plans to meet Ron's wife, Deborah, in heaven. I think I was more moved and inspired by Same Kind of Different As Me, though. This is a wonderful collection of stories about how others were inspired by that book, and it offers great ideas for how you can make a difference. But I was more personally affected by the first book myself.

I think What Difference Do It Make? would be an excellent choice for religious groups to read, both as a book study, and as a study in how they can make more of a difference to the people in their community. So many groups think they are helping by collecting clothing and money, but they could be doing so much more.

This review was written based on a copy of What Difference Do It Make? that I received from the publisher, Thomas Nelson. This is book #18 for the Countdown 2010 Challenge.