I don't have a lot to report on this week. C has been focused on reading just two books this week, and I've already written about one of them, The Cat on the Mat is Flat by Andy Griffiths. He is still loving this book and wanting to read the stories in it instead of any of the early readers I've taken out of the library. 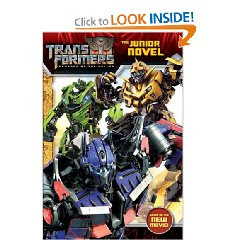 The second book he's been focusing on this week is Transformers: Revenge of the Fallen: The Junior Novel by Dan Jolley. This is a more advanced chapter book that we've been reading to him for a couple weeks. We just finished it up this week. At the age of 5, he has not seen either of the Transformers movies in their entirety. But we've let him watch certain scenes and he loves the toys. These Junior Novels are great. We read the one for the first Transformers movie as well. We've actually taken that one out of the library a couple times because he likes it so much. We bought this second one. The book follows the movie for the most part, but there are definitely some changes made to make the story less complex. And they've removed all the scenes that make the movie PG-13, basically anything related to sex and drugs. It works out perfectly so we can read this to C and not have to worry about it being inappropriate. 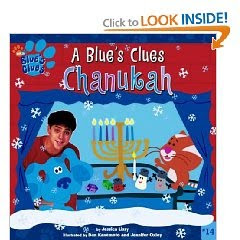 I hadn't managed to get any Chanukah books previously, so this week I went to the library and picked up A Blue's Clues Chanukah by Jessica Lissy. I figured it would appeal to both of my kids since they both enjoy Blue's Clues. The story is about Joe and Blue going to a Chanukah party, where they learn about menorahs, latkes, dreidels and other Chanukah traditions. It's a great introduction to the holiday for young kids. Something to put on the list for next year since the holiday is over now!

I also picked up Aladdin: A Read-Aloud Storybook for M since this is one of the princess stories we haven't read before. It's illustrated by the Disney Storybook Artists, so the pictures are vibrant and true to the movie, like the princess storybook we borrowed from the library previously. The only issue is that it's quite long for a 2 year old. The princess storybook had three different stories in the same size book, but this is one long story. I think a shorter version of Aladdin would be better for her at this age.