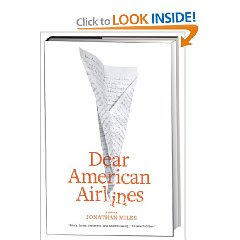 Dear American Airlines, My name is Benjamin R. Ford and I am writing to request a refund in the amount of $392.68.


And so begins a novel that is, essentially, a letter written in one night by a man who is stranded in Chicago's O'Hare Airport. Although directed to the airline many times, the letter is actually a rambling, stream-of-consciousness account of Bennie's life. His childhood, his parents lives, his marriages, his drinking, his writing. All put down on paper while he waits, frustrated, for a flight to his estranged daughter's wedding.

This book was a departure from those I have read recently, and I had a tough time with it. Although it was nice to read something different, I just didn't enjoy the format in which it is told. The story is full of metaphors and tangents and paragraphs that flow and flow, never to be broken by a new chapter. It is meant to be the uninhibited ramblings of a man, and it is true to this. But it was just a bit too much for me.

I honestly think I would have enjoyed this book more if I were on a trip myself, with nothing more to do than sit on an airplane and read. It's a short book and the format lends itself to a single read-through, as opposed to a week-long, pick it up, put it down reading, which is what I tried to do.

This review was written based on a copy of Dear American Airlines that I purchased.